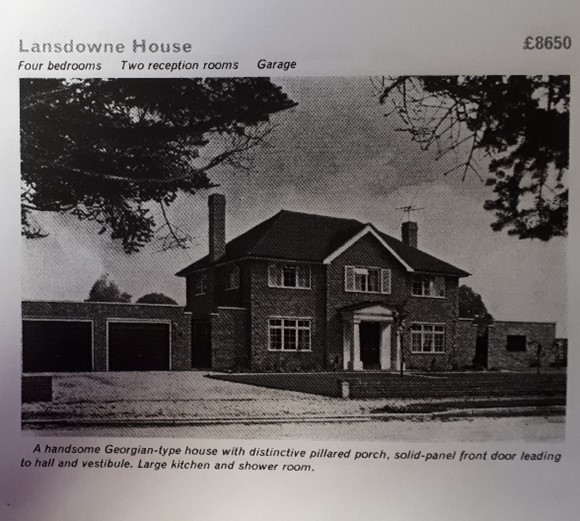 The area that is commonly referred to as The Berg has a very special feeling due to its park-like surroundings and this is a little of the history explaining how it came about.

It was previously home to Chiltley Place, its gardens, arboretum and estate.  Chiltley Place was built in the 1880s following the division of Chiltley Manor estate when the railway came to Liphook and bisected the land of the original manor.

The eastern part of the estate was sold and Chiltley Place was built in the Arts and Crafts style for Mary Ann Robb and her son.  This redoubtable lady was a keen gardener and was a contemporary and friend of Gertrude Jekyll as well as many other well-known figures of the day.

Mrs Robb went on many plant-finding expeditions, including to Turkey from where she brought back a new plant specimen in her hatbox.  This was named Euphorbia Robbiae, known more commonly as “Mrs Robb’s Bonnet”.  From her travels, she brought back many rare specimens of trees including Sequoias, various oaks and pines and these she planted in an extension to her garden to create an arboretum.

Mary Ann Robb also had the property known as Goldenfields built in 1891 and in her later life lived there while her son and his family lived in Chiltley Place. Following the deaths of Mrs Robb and her son the house and estate were sold in 1927. It was sold by Alfred Eggar and Co by auction at the Royal Anchor Hotel in Liphook.  This historic coaching inn is still open as a pub and restaurant in the centre of the village.

The fascinating original sales details are still in existence and can be seen in The Heritage Centre in Liphook where they are featured on one of their permanent display boards.  This Notice of Auction gives us an insight into the size of the estate at that time.  Apart from the sizeable house, the estate included stables, workshops, a croquet lawn, tennis court, a racquets court, summerhouses and walled kitchen garden. 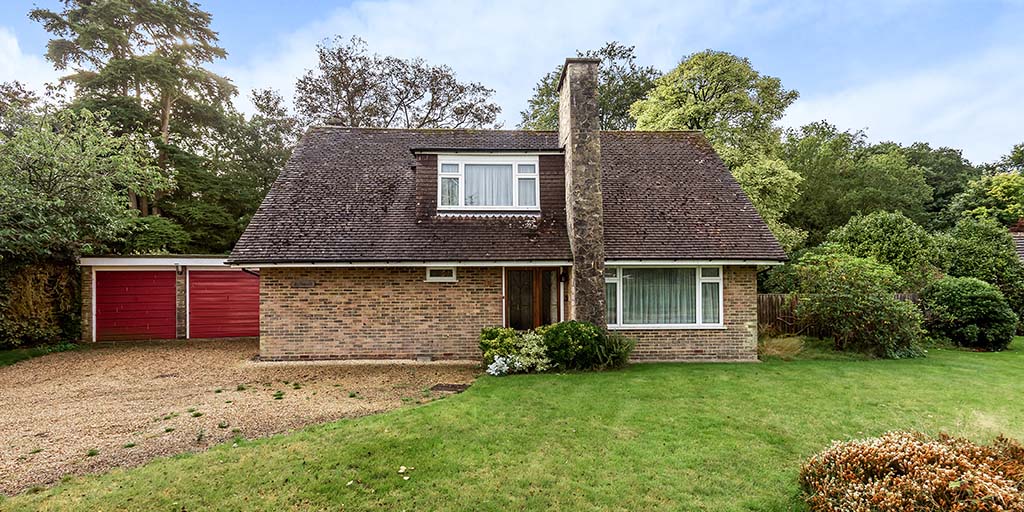 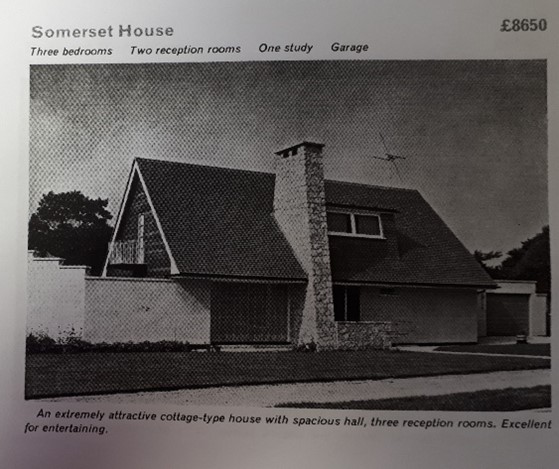 Original advert of the above, listed as an attractive Cottage-Style House with 3 bedrooms

In addition, there were 31 acres of arboretum plus fields and housing for staff and tenants including Shepherd’s Farmhouse (incidentally marketed by Clarke Gammon in 2021).  In all the estate came to 151 acres and roughly went from the railway line to Highfield Lane.  In that sale of 1927, the estate was sold off in various lots, the fields and Shepherds Farm being bought by Canon Mills of Highfield School. In later years, around 1939, Shepherds Farm was subsequently sold to the Conrans, parents of Terence, who was then at Highfield School.

During the second world war, in 1941, Chiltley Place was requisitioned by Portsmouth’s Public Health Department for use as a maternity hospital, safely away from the docks and the danger of bombing. It remained in use as a hospital until November 1945. In 1950 the Eltons bought Chiltley Place and attempted to modernise it but without the pre-war availability of servants, it became increasingly difficult to maintain.  Jack Elton did try to get permission to develop some areas of the estate but his attempts were refused by the planning authority. Eventually, the Eltons sold to the Berg brothers in 1960 for £18,000.

Ellis Berg established his company in the early 1920s with the intention of providing homes for people wanting to leave the congested and smoky inner cities for the countryside.  Even in 1908 the rate of people moving from inner London was at the rate of 13,000 per year.  In 1920 the government developed a policy to answer this demand that allowed land to be built on within reach of the capital.

Initially, the Bergs constructed buildings for central and local government but after World War II when house building re-commenced the Bergs used their experience to build housing estates around the South East including Hinchley Wood, Cobham, Oxshott and Sunbury.  They had a large development at Basingstoke that included a row of shops.  This development was advertised on their stand at the Ideal Home Exhibition in 1957-58. 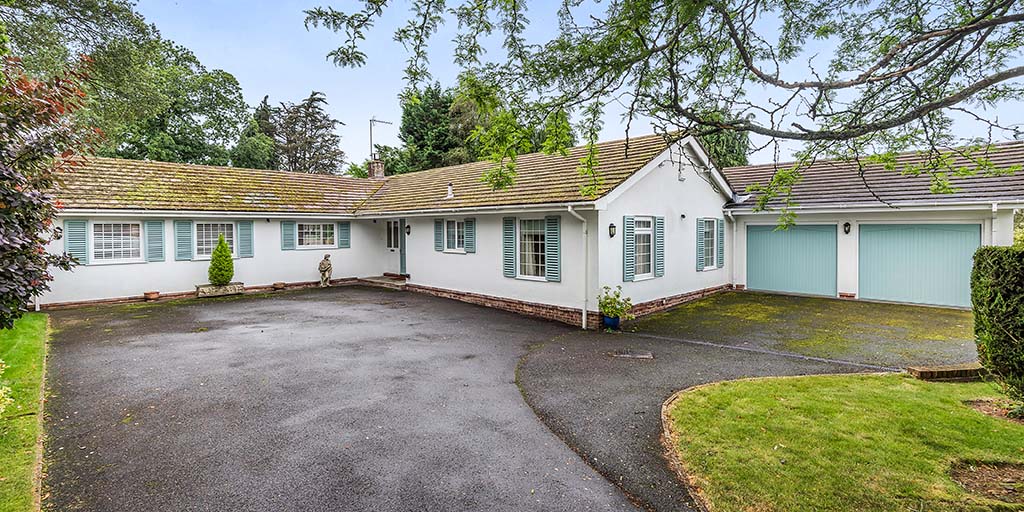 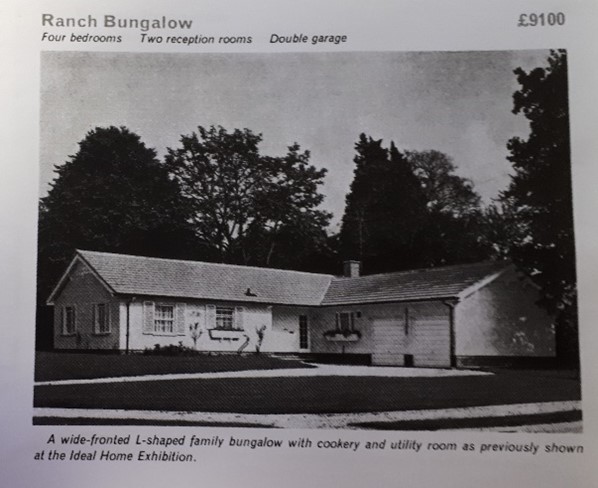 Original advert of the above, listed as an L-Shaped family bungalow

In 1960 E and L Berg Homes Ltd got planning permission to demolish Chiltley Place and to build luxury houses and bungalows on the estate.  The sale to the Bergs had a covenant stating the site should never be used as a school, hospital, Borstal or lunatic asylum!  It is thought this could be because of the link with the headmaster of Highfield School.

The sales brochure describes the development as “In beautiful surroundings yet adjoining the station.  This exclusive private development is situated in a park setting amongst specimen trees, yet adjoins Liphook Station, with a fast train service to Waterloo Station in 65 minutes.”

The Berg estate was built on 45 acres of land, the first house was occupied in 1962 and around twenty-five houses were completed by 1965. These original houses were in Chiltley Way and Shepherds Way.  Many of the first occupants of the estate worked in London, able to commute by train to Waterloo in just over an hour – the same time as today.  At the 1964 Ideal Home Exhibition E & L Berg Homes Ltd.’s stand displayed the Lansdowne House style from the Liphook estate.  This mock Georgian style was then the most popular so was used to advertise the estate.

Around the same time the Berg brothers also built properties in South Road, Chiltley Lane and Hollycombe Close.  Building continued in various areas of the estate until 1970. A further 22 acres of the Goldenfields land was then purchased and building continued until the end of the 1970s. In that later part of the development, the roads were named after specific remaining trees of the arboretum, e.g. Ash Grove and Chestnut Close where the trees are in some of the gardens, and Willow Gardens and Close which were named after the enormous weeping tree at the junction with Goldenfields – actually a weeping beech. In all Bergs built a total of 243 properties in Liphook.  At the end of the 1980s, another eleven houses were built on the garden of Goldenfields by Jasro Hall.  There is also one plot that had a Guildway bungalow built on it. 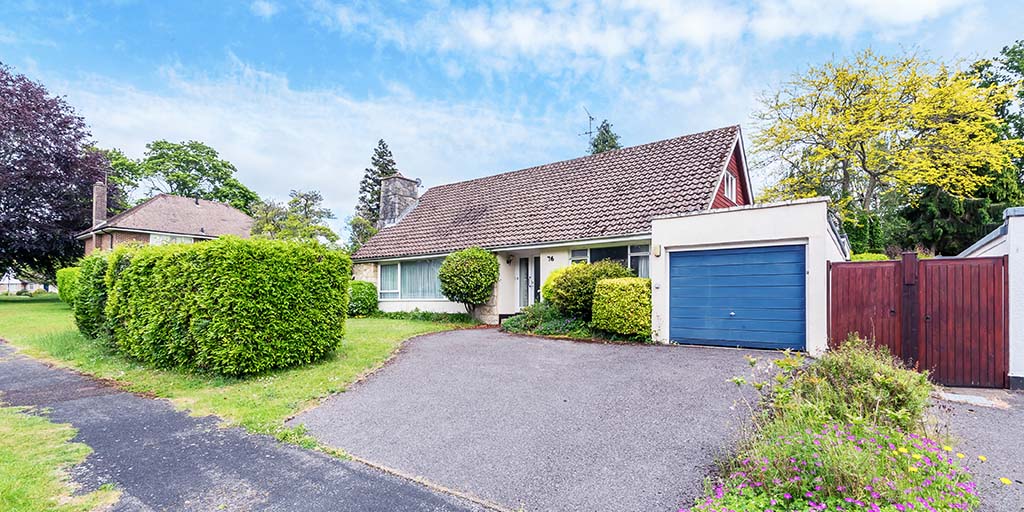 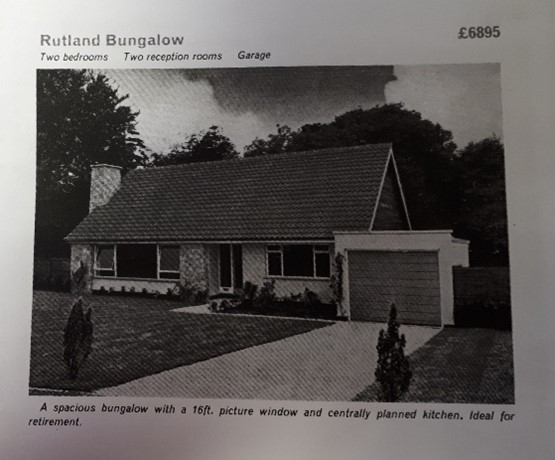 Original advert of the above, listed as a Spacious Bungalow

In the Berg estate, the County and District Councils gave specific treatment to the area to preserve its interesting arboricultural background.  Amongst the many stipulations on the planning consent were several to safeguard the arboretum. 130 trees were named and preserved, and no trees on the site were to be lopped, topped or felled without council consent.  The estate had to maintain open plan frontages to the plots, the width of the grass verges was stipulated, the maximum density to be 2.7 properties per acre and the properties to cover a floor area of 1500 sq. ft.

All the access roads and services were carefully planned to avoid specimen trees.  As well as placing Tree Preservation Orders on Mary Robb’s finest specimen trees once the estate was completed the County Council added more trees.

Whilst the general policy of maintaining the park-like feel of the estate continues, if trees need to be replaced they may not necessarily be of the same species.  However, the intention is that the character will be maintained.  Bergs also added covenants to prevent the style of the estate being changed, such as, no fences beyond the fronts of the houses, no “For Sale” boards and a ban on running a business from the properties.

A lady who has been living there for 23 years has told me how much she enjoys living on The Berg, describing it as “A quiet and peaceful area of Liphook. It is a mix of houses, chalet bungalows and bungalows so lends itself to a good mix of residents both young and old(er). We mostly have open grass frontages and are not allowed to build on them so it has an almost American feel.  Additionally, we have no overhead power lines so nothing to spoil our views.”  There are two Neighbourhood Watch groups in the estate, a group that keeps residents up to date with nearby issues of all sorts and, additionally, a neighbourhood Garden Party.  I understand that 150 residents attended the Garden Party in 2021.

Thus, the Berg Estate remains today a peaceful and attractive setting and due to its popularity house sales there continue to be strong.

Contact our Liphook Office for help and advice about buying or selling a home within The Berg Estate, Liphook. 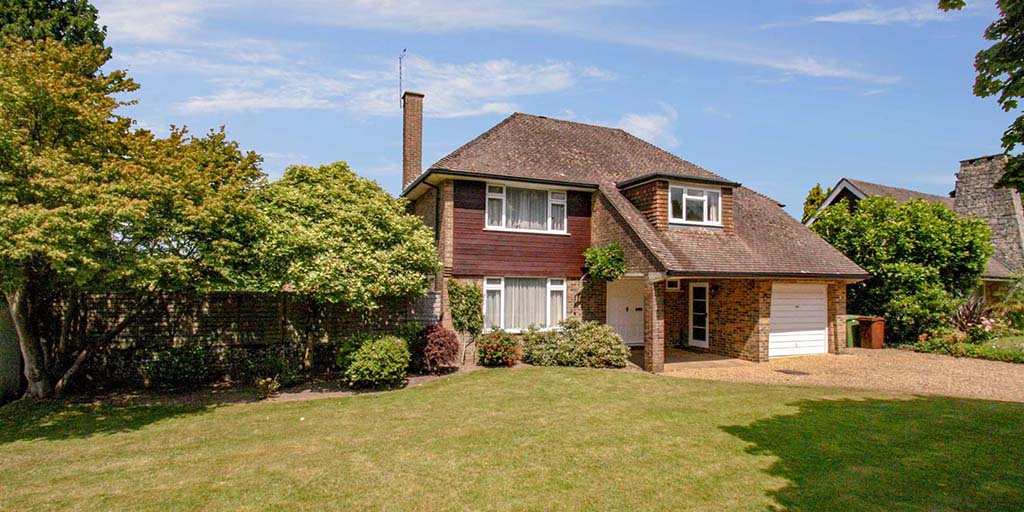 Current example of a Berg Estate House in Liphook